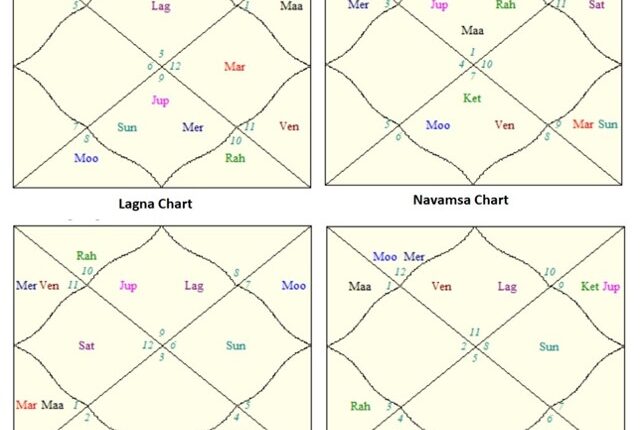 Astrologers of maturity have quite often said that a Shastri is one who can efficiently use the shodashvarga as given by Maharishi Parashara. It is further said that a person who uses the birth chart and Navamsha for predictions, is an ardhshastri. Readers using only the birth chart may at some time miss the finer picture.

It has been a habit among recent astrologers to completely ignore the divisional charts while giving predictions. The following reasons can be cited for this practice:

a. The time of birth required should be correct for the effective use of such divisional charts. (This is generally difficult to come by, nowadays).

b. The calculation and interpretation of such charts require much skill and only a genuine astrologer can justify it.

c. This slows the speed of analysis and predicting as lots of data have to be filtered before an astrologer can reach a conclusion. Normally, this does not suit stereotype predictions. Also, those who come for consultations normally have no patience for a detailed analysis.

The secret of reading any divisional chart is to read it as an independent chart and examine the Avashtha of the various Karakas therein. In the absence of the exact time of birth in some exceptional cases, the divisional chart can be examined from the birth of Lagna itself (Rashi — tulaya). The applicability of the divisional charts is given below:

Generally seen for ascertaining the quantum of wealth and the way the person is going to make his earning. Male planets in the Sun’s Hora are seen as beneficial while female planets are effective in the Moon’s Hora. If maximum planets are in the Sun’s Hora it is said that the native earns money as a result of hard work but the quantum of wealth may be very good. If Moons Hora predominates, the earning will be relatively easy. However, this is subject to the Dhan yoga formed in the horoscope.

Generally seen for ascertaining the overall happiness of the native, mainly with regard to the possibility of having immovable assets, particularly property. This chart can also be seen for the possibility of foreign immigration or change of residence. The marriage of a girl child (as it normally makes the girl change her house) can also be read from this horoscope.

This is the most important horoscope. This is used to see the actual strength of a planet. An exalted planet in the birth chart (if it debilitates in the Navamsha) may not give very good results or its effects can get diluted. However, a planet getting empowered in Navamsha by getting vargottama or by getting exalted will give good results. Apart from this, Navamsha is a horoscope that is used to find out about the spouse of the native. Some secrets of predictive astrology are hidden in the use of this divisional chart. Normally, no prediction should be made without confirming it from the Navamsha. The lord of 64th Navamsha from the Moon becomes highly important for the calculation of Longevity and the Maraka dasa.

This chart is seen generally to get a clear picture of the profession of the native. The placement and avashtha of the tenth lord of the birth chart are important here. Apart from that the Rashi rising in the 10th house of this divisional chart and the influence on the 10th house has also to be considered, to judge the profession and any professional growth or fall of the native. Like any other divisional chart, this one has to collaborate with the basic chart.

This chart is generally seen for understanding the benefits arising out of parents. The respective longevity of both the parents can be understood from this chart. This chart is also said to reveal the Purva Janma Punya of the native. Here, (as in all divisional charts) the Avashtha of the natural Karaka has to be seen. Here, the Sun represents the father and the Moon represents the mother. Here, the influence on the ninth and the tenth house has to be understood. The Lord of the 88th Dwadashamsha is important in longevity analysis. This chart also is said to reveal whether a person inherits a disease from his parents.

This is to see the promise of conveyances for the native and also accidents through conveyances. For this, the Karaka for conveyance, Venus, has to be seen. Affliction to the 4th Lord and the 4th house has to be seen along with the affliction of Venus. This can lead to violent accidents if otherwise also promised in the Birth Chart.

This chart is said to give a finer picture with regard to the education of the individual. The house to be considered is the 5th house. Further, influences on the fifth house have to be seen along with the avashtha of the 5th Lord of the birth chart. The connection of the 5th lord with the 6th, 8th and 12th lord is supposed to bring disturbances and educational change for the native. If however, such planets are under the benefic influence the change in education will be for the betterment of the native. An example of this can be that a person does Engineering and then does Management. This constitutes a change technically in the astrological terms but benefic association makes the change good for the general prosperity of the native.

This chart is seen to understand the general strengths and weaknesses of the native. It can sometimes be used to find the stamina, endurance and physical strength of an individual.

This chart is generally seen to ascertain the miseries, difficulties and diseases for a particular native. This chart in women horoscopy is also said to show the character of the native. It is said that in the case of women if Trimshamsha of Mars is rising she is of questionable character. However, this chart can also be read to verify the character in the case of a male native.

This is generally seen for studying the auspicious and inauspicious effects of the horoscope on the native. But, it has to be noted that in prediction this chart cannot be used much as even a few seconds of time difference can change the Lagna. This should be used only on thoroughly rectified horoscopes.

This is seen for ascertaining the character of the native and for general auspicious and inauspicious effects. Here, as in the above case, this chart becomes too time-sensitive, making it difficult to take it into account while giving predictions.

Maharishi Parashara has given lots of importance to this chart. This should be seen for every prediction. This chart makes the reading interesting and makes the analysis accurate. However, again the limitation of this is that it can be used on an astrologically rectified chart.