Why Do We Go to Temple and How Does it Help Us? 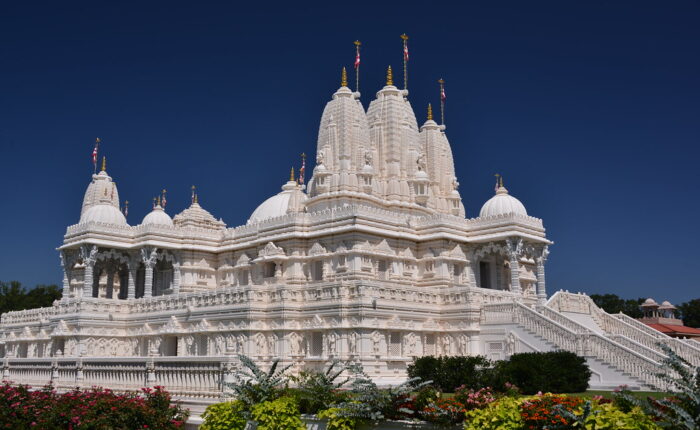 In the seventh chapter of Shrimad Bhagwat Gita, Lord Krishna said to Arjun:-

Translation: O best among the Bharatas, four kinds of pious men begin to render devotional service unto Me- the distressed, the desirer of wealth, the inquisitive, and he who is searching for knowledge of the Absolute.

The concept of God in Hinduism runs in two parallel lines:

The necessity of concentration on embodied form of God was the main reason behind the construction of temples for Gods and Goddesses. However, the concentration of mind is absolutely necessary for establishing union with God. This is a difficult thing to do whether one attempts to worship God in manifested form or in the form which is not manifested. The difficulty was mentioned by Arjun in Gita.

Translation: The mind is restless, turbulent, obstinate and very strong, O Krishna, and to subdue it, I think, is more difficult than controlling the wind.

It is believed that the construction of temples started in Kaliyug (the last of the 4 Vedic epochs). In the earlier Satya Yuga, Treta Yuga and Dwapar Yuga, the devotees were able to make direct union with God.

The importance of temples started growing because they became centres and mediums for communion with God. The main benefits of going to temples may be explained below:-

The Main Purpose is Puja by Devotees:

It becomes easy for a devotee to concentrate on worshipping God in a temple where hundreds of devotees come for the same purpose. God must be approached with humility, without pride, tolerance, simplicity, self-control, renunciation of the objects of sense gratification and steadiness. The environment of the temple produces a psychological effect that helps in concentrating on the desired objective.

A temple is a place where a devotee tries to remain free from the perception of evil of birth, death old age, disease and entanglement with children, wife, home and the rest of the world. The main motive is to do worship and every other thing becomes unimportant.

The ego is the greatest enemy of man which is the cause of lust and anger. These evils are impediments to establishing communion with God. In the environment of the temple, in the midst of hundreds of other devotees, the false sense of ego begins to evaporate and the individual becomes a non-entity. This state is the best state for offering Puja to God when body and mind remain in unison.

It is said that God lies in faith. Temple is a place where people believe that God exists. It is the reason why God manifests Himself in temples for the sake of his devotees. Some temples attract a large number of devotees and miracles of those temples are widely talked about.

In India, there is a tradition of pilgrimage of 4 Dham (main pilgrimage centres) — Badrinath, Dwarka, Puri and Rameshwaram. There are other important pilgrimage centres like Kedarnath, Kashi Vishwanath, Tirupati Balaji, Shirdi Dham, Vaishno Devi, Amarnath and others. The devotees take all kinds of trouble to go to such distant places. The hardships make their will stronger and they march ahead with a clear focus.

In the Indian tradition, lakhs of people go to the Kumbh Mela for taking bath in holy rivers and offer worship at Haridwar, Prayag, Ujjain and Nasik. The Kumbh Melas are the largest known human gatherings in the world where the individual identity of the devotee gets completely drowned in the sea of humanity. The devotee worships in a state of trance.

Even in a neighbourhood temple, the environment for worship is different from the environment of the home because services of competent priests are available in the temple to guide devotees in performing rituals. The utensils utilized in worship are mainly of copper and brass which are considered beneficial. The dimly lit Garbh Grih (Sanctorum) of the temple produces a sense of mystic and helps the devotee focus on the divine. It also reminds us that God is the only light amidst darkness.

Other Purposes for Going to Temple:

Temples are places for organizing Bhandara (mass feeding). The practice of funding Bhandaras for devotees is found in almost every big temple of the country like the Golden Temple of Amritsar, Shirdi Dham, Tirupati Dham etc. People go there to take prasad.

Temples are growing as centres for community marriage also. Marriages are getting very costly and going beyond the reach of families. Therefore temples are developing as ideal centres for the solemnization of marriages at low cost.

People go to temples for astrological remedies as well. Astrologers suggest some specific Puja based on the horoscope of an individual for Graha Shanti (worship for a planet) or doing remedies for any specific dosha (affliction) in the horoscope. It is easy to do such remedies in a temple.

The Mundan ceremony (first haircut) is also an important reason for going to the temple. Tirupati Balaji and Rishikesh are important places for this ceremony where the babies get their first haircut.

Temples are also attractive for tourists. Some temples mainly in South India are marvels of architecture and they attract a large number of tourists from across the world.