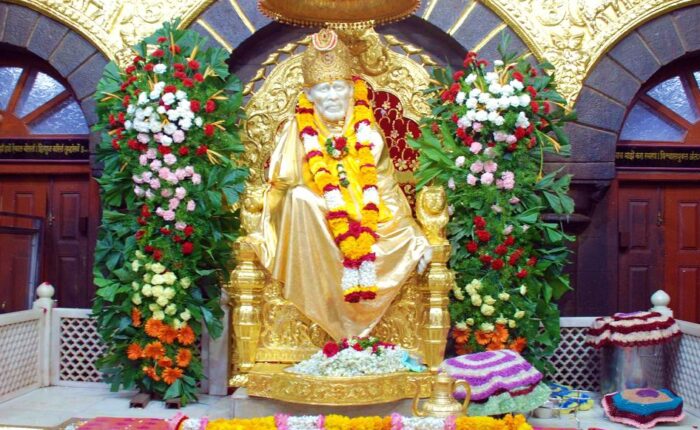 As per Shri Sai Satcharita, “There are two aspects of God or Bramha (a) the Unmanifested (Nirgun) and (b) Manifested (Sagun). The Nirgun is formless, while the Sagun is with form, though, both denote the same Bramha. Some prefer to worship the former, some the latter. As stated in the Gita (chapter XIII) the worship of the latter is easy and preferable. As man has got a form our love and devotion do not develop, unless we worship Sagun Bramha for a certain period of time, and as we advance, it leads us to worship (meditation) of Nirgun Bramha.

Some say that Shri Shirdi Sai Baba was a devotee of the Lord, others say he was a great devotee, but people and saints of yore like Shri Upasani Maharaj and Shri Mehar Baba have confirmed that Sai was God Incarnate. Hence, if Sai is worshipped in Manifested (Sagun) form, devotees start getting a glimpse of his Unmanifested (Nirgun) form.

One day at noon, after Aarti, baba gave the following advice:-

“Be wherever you like, do whatever you choose, remember this well that, all that you do is known to Me. I am the inner ruler of all and seated in your hearts. I envelope all the creatures, the moveable and immovable world, I am the controller – the wire puller of the show of this universe, I am the Mother – origin of all beings – the Harmony of three Gunas, the propeller of the senses, the Creator, Preserver and Destroyer. Nothing will harm him, who turns his attention towards Me, but Maya will lash or whip him, who forgets Me. All the insects, ants, the visible, movable and immovable world is My body or form.”

The following example from Shri Sai Satcharita illustrates that “Sai lives in all beings”.

Once, Mrs Tarkhad was staying in a certain house in Shirdi. At noon meals were ready and being served when a hungry dog turned up there and began to bark. Mrs Tarkhad got up at once and threw a piece of bread that the dog gulped with great relish. In the afternoon when she went to the Masjid and sat at some distance, Sai Baba said to her “Mother, you have fed me sumptuously My famished Pranas (life-forces) have been satisfied. Mrs Tarkhad did not understand this too which Sai Baba explained as follows.

“The dog, which you saw before meals and to which you gave the piece of bread, is one with Me, so also other creatures (cats, pigs, flies, cows etc.) are one with Me. I am roaming in their forms. He who sees Me in all these creatures; is My beloved. So abandon the sense of duality and distinction, and serve me as you did today.”

Sai Baba’s omnipresence can be further understood from the experience which Mr Cholkar got. This is as per the Shri Sai Satcharita. “If you spread your palms with devotion before Me, I am with you, day and night. Though I am here physically, still, I know what you do beyond the seven seas. Go wherever you wish, over the entire world, I am with you. My abode is in your heart, and I am within you. Always worship Me, who is seated in your heart as well as in the hearts of all beings. Blessed and fortunate indeed is he, who knows Me thus.”

Baba said that He was omnipresent, transcending land, air, world, light and heaven and that He was not localized. To remove the misunderstanding of those who thought that, Baba was only His body – three cubits and a half in length, He incarnated Himself in this Form, and if any devotee meditated on Him, day and night, with complete self –surrender, he experienced complete union with Him, like sweetness and sugar, waves and sea, eye and its sight.

The kind and merciful Sai Baba said many times the following sweet words in the Masjid:

“He who loves Me. most, always sees Me. The whole world is desolate to him without Me, he who tells no stories but Mine; he ceaselessly meditates upon Me and always chants My name. I feel indebted to him who surrenders himself completely to Me and ever remembers Me. I shall repay his debt by giving him salvation (self-realization). I am dependant on him, who thinks and hungers after Me and who does not eat anything, without first offering it to Me. He who thus comes to Me, becomes one with Me, just as a river gets to the sea and becomes (one) with it. So leaving out pride and egoism and with no trace of them you should surrender yourself to me, who is seated in your heart.”

Sai Baba expounded many times who this Me (or I) is. He said, “You need not go far in search of Me. Barring your name and form, there exists in you as well as in all beings a sense of Being or consciousness of existence. That is Me. Knowing this, you see Me inside yourself, as well as in all beings. If you practice this, you will realize all-pervasiveness and thus attain oneness with Me.”

Baba often said, “He who carps and cavils at others, pierces Me in the heart and injures Me, but he that suffers and endures, pleases Me most”. Baba thus pervades all beings and creatures. He likes nothing but love to all beings.